For the past two years we have participated in a coalition of organizers that promotes working-class militancy in Austin on May 1st, International Workers’ Day. We call on the working class and all revolutionaries in Austin to unite on May 1st at 6:00 pm at the corner of West 4th St and Guadalupe near the park to oppose US imperialism and recent ICE raids connected to the proto-fascist Trump administration. The workers of Austin have a shared interest with the workers of the world, the people facing deportation across the US, and the people of Syria. If we oppose deportations and demand that refugees must be made welcome here then we absolutely must oppose the imperialist war in Syria, which creates refugees and torments a sovereign country. In the world today, US imperialism and its corporate monopoly capitalist ruling class are the number-one enemy.

US imperialism is the number 1 terrorist!

May Day is international

We extend our heartfelt greetings to our comrades the world over who will rally against capitalism on behalf of our class: Jugendwiderstand in Germany has called for the workers and youth in the working class district of Neukolln in Berlin to assemble and demonstrate and we wish to send them our salutations and comradely greetings from Austin, TX. We also wish to extend our greetings and solidarity to the comrades of Red Guards Los Angeles, Red Guards Philadelphia, Kansas City Revolutionary Collective, Queen City Maoist Collective, San Marcos Revolutionary Front, Dallas Antifa, as well as our comrades in Houston, New Orleans, Mobile,  and elsewhere this May 1st. Comrades across Europe, Asia, and Africa embody the slogan it is right to rebel as they prepare for a day of festive militancy on May 1st. Revolutionary communism does not ask this system nicely—we do not play softball with the police and their collaborators.

We insist that International Workers’ Day must not be stripped of its militant character. There are those  who wish for nothing more than a spot at the table of the ruling class. They desire, like all vampires, the blood of the people, and seek to get it by acting in ways acceptable to the system. Their NGOs as well as revisionist organizations shun all resistance and dampen all rebellion. They equate the inevitable repression that necessarily results from resisting ruling-class interests with abject failure. They are the ruling class dressed as workers, and we must draw firm demarcations between them and ourselves. While these revisionists might speak in the language of revolution, what they are saying is “it is wrong to rebel.” They do not dare to struggle, hence they do not deserve to win.

Revisionism and social democracy as well as the NGO charity complex will (when it suits them) call for an “anti-war” movement. Yet history has firmly demonstrated the cruel limitations of being “anti-war.” We call unequivocally and unwaveringly for an anti-imperialist movement in Austin. We must stress that there are two types of war: the first type is the imperialist war of aggression, which is right now being escalated against Syria (and continuously waged against Yemen, Somalia, Pakistan, Libya, Iraq, and Afghanistan), and the second type of war is waged by oppressed nations and revolutionary people the world over—a righteous war against imperialism, chiefly US imperialism. This second type is war that we must support—the people’s war in India and the war against US imperialism for democracy in the Philippines as well as wars waged by other nations and liberation forces that lack a socialist character but nonetheless serve the interest of the broad masses by halting or dealing blows to US imperialism. All these wars must be supported. The world proletarian revolution is in the upswing, and the fall of revisionism and its overall discrediting have been consolidated. Maoism is the way forward. 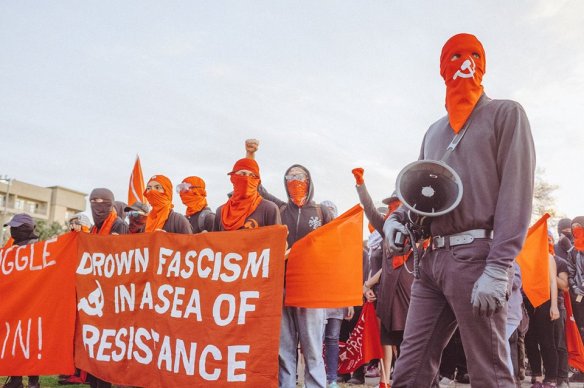 We encourage all antifascists, revolutionaries, and comrades to participate in the planned event be they Maoists, anarchists, or any other genuine anti-capitalists, anti-imperialists, or anti-fascists.

This International Workers’ Day is a special occasion: this year marks the 100th anniversary of the Great October Socialist Revolution in Russia, led by the great teacher of Marxism Comrade Lenin. It is Lenin who provided the world with the revolutionary analysis that imperialism is the highest and final stage of the capitalist system. This system has nowhere to go but down. While it steels itself against setbacks and continues plundering the world, we proletarian revolutionaries ready forces to take part in the next great wave of proletarian revolution. We owe a great debt of honor to Lenin and the Bolsheviks, who proved concretely that socialist revolution is possible. Lenin warned of world wars as a result of imperialist countries trying to re-divide the world among them, and it was Lenin who turned the imperialist war between Germany and Russia (part of WWI) into a civil war in which the working class took power. 100 years of Bolshevik revolution have provided the working class with sharp weapons that became sharper still in the struggles in China led by Chairman Mao and the struggles in Peru led by Chairman Gonzalo, who synthesized Marxism-Leninism into Marxism-Leninism-Maoism, proving Mao’s contributions to be universally applicable. None of this would have been possible without the lessons drawn from the Great October Socialist Revolution.

Long live the teachings of Lenin

May Day goes back to the Chicago Haymarket martyrs of 1886 who fought and died to establish the eight-hour work day and was taken up as International Workers’ Day by revolutionaries the world over. International Workers’ Day was carried out illegally as a day of celebratory resistance in Russia before the October Revolution, after which it was legalized. May Day of 1917 was boycotted by the reactionary Mensheviks and other social-democrats (liberals!) who in their current incarnation here in Austin seek not to boycott May Day but to empty it of all its militant content and make it just another hollow display acceptable to the ruling class and the state. For the past two years we have helped to make May 1st a day to remember in Austin, and we know full well that this would not be possible without, first and foremost, the masses themselves, and secondly comrades in other organizations. It is our honor to carry on in this tradition and to continue waving the red flag of revolution!

RGA leading  May 1st demonstration in 2015

US Imperialism out of Syria!